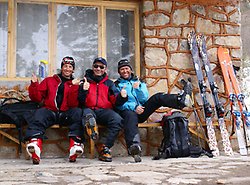 The Caucasus form a chain of snowy, high, alpine mountains separating Georgia from Russia to the north. Just north of the main chain, in Russia, lies the Europe’s highest summit - the twin-peaked Mount Elbrus. The main chain itself contains many mountains over 5000m and tens of summits higher than Mont Blanc.

This trip combines some excellent ski-touring with the possibility to ascent the highest summit in Europe - Mt. Elbrus. In winter time valleys, passes and mountains of the Caucasus offer exceptionally fine ski-touring in virtually undeveloped surroundings. The snow conditions are generally superb in spring and the mountains are beautiful and not spoilt. We will fly to Mineralny Vody in the northern Caucasus and drive to the Ullu-Tau lodge located at 2350m in the remote upper sections of the Adyrsu Valley. We will start touring almost from the hotel door generally following glaciers to passes and summits ranging from 3572m to 3900m. After four days touring in the  Adyrsu Valley we drive to the Baksan Valley. The Baksan Valley is the most important and best developed valley in the Caucasus, partly because of the mineral wealth located near Tyrnyauz and partly on account of Elbrus at its head and the hundreds of magnificent mountains which comprise it’s watershed. Almost at the end of the Baksan Valley, at the foot of Elbrus, lies Terskol - the Chamonix of the Caucasus. It boasts about half a dozen hotels and two ski lift systems. There is a possibility for another several tours in the area viewing the highest peak in Europe - Mt Elbrus, which we attempt at the end of our trip. We use the Elbrus cable car and chairlift system to transfer to the Garabashi huts at 3800m on the south slopes of the mountain. This is our base for the three nights from where we will make an attempt to the west summit of Elbrus. Depending on the conditions we may use a snow cat for the part of the ascent and then ski up as far as possible. Crampons and ice axes may be required on the upper slopes which are easy angled but often icy in the morning hours.