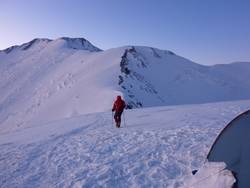 Of the four peaks in the former Soviet Union which are over 7000m high three lie in the Pamir Highlands of Central Asia. The name Pamir itself refers to the great valleys that divide the various mountain chains. Peak Lenin, at 7134m, is the third highest; the fourth highest, Peak Pobeda, lies nearby in Tien Shan. Peak Lenin is located in the northern-most of the High Pamir mountain chains the Zaalayski Range. From the summit looking south-west the other major ranges dominate the skyline. On a clear day it is possible to see the summit of Peak Communism 120 km away at 7495m the highest summit in the Pamir, and occasionally the Hindu Kush mountains some 220 km away. Looking north one sees the great Kyzylsu (Red River) Valley, to the east the Chinese Pamir.

Peak Lenin is a popular mountain, it is often considered to be the easiest 7000m summit in the world for climbers since it is relatively accessible and technically straight forward.

The team leader will be a Russian master of sport. There will be some assistant guides all with 7000m experience. In every base camp (at 3600m and 4200m) there will be a base camp cook and a base camp doctor who will be fully equipped. Apart from our team outlined here there is also a permanent rescue team available near our base camp.

Day 1: Arrive in Osh Aiport, Kyrghyzstan, early in the morning. The trip is based on the Turkish Airlines direct Istanbul – Osh flight. Transfer to hotel.

Day 2: Drive from Osh to the Achik-Tash Base Camp (BC). 280 km, about 8 hours driving. Accommodation in tents based on double occupancy.

Day 4: Day of rest. acclimatising. BC.

Day 15: Reserve day for the Summit.

Day 18: An extra spare day for the case of bad weather conditions. BC

Day 19: Drive from the Base Camp to the town of Osh. Hotel.

Day 20: Transfer to the airport for the Turksih Airlines flight departing at 05:40 a.m.